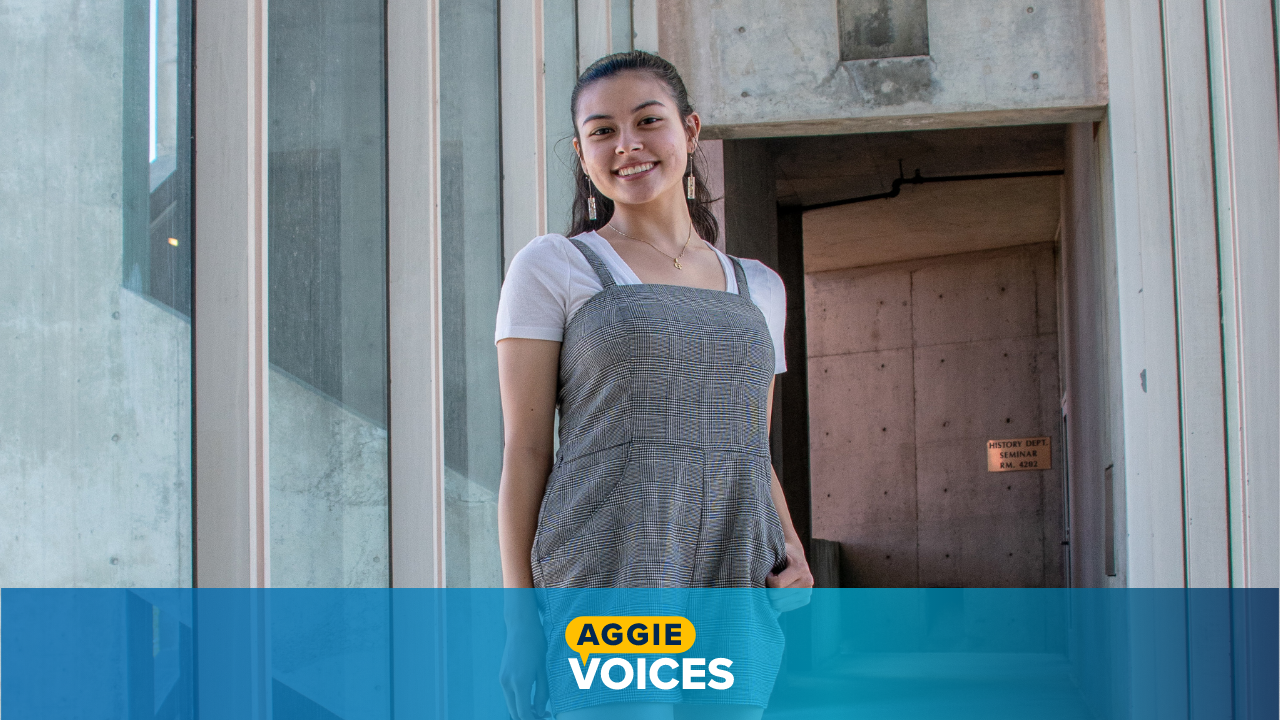 As a lifelong Sacramentan, Tia has always known about UC Davis. She took Chinese dance classes in Davis growing up and, at age 8, even performed at Picnic Day. So, she wasn’t expecting any surprises on her initial tour of campus. “I had toured so many other schools, and when I got to UC Davis, I was expecting it to have a similar energy, but there was just something different about it,” she says. “The way people were so sweet to each other and very kind and genuine—I could just feel that, no matter where we were or what we were doing.”

Tia knew going in what she wanted to study. On trips to her mother’s homeland of Indonesia, she saw the extreme pollution of hyper urban Jakarta along with some of the most beautiful natural places on earth, all in the same country. This made a lasting impression, and Tia knew early that she wanted a career connected with the environment.

A huge fan of the UC Davis Arboretum, this quarter she’s working as an Arboretum Ambassador (a part of the Learning by Leading program), doing public outreach, cultural and environmental programming as well as conservation education, and getting experience relevant to her Environmental Policy Analysis and Planning major. It isn’t the first time Tia has found herself in the role of ambassador.

Tia’s YouTube channel, which grew out of her interest in makeup, underwent a makeover of its own following the response she got to her first video about UC Davis. A recap of her first quarter, the video garnered more than 12,000 views and 72 comments. That level of engagement, along with the many private messages and questions she received from people interested in coming to UC Davis, caught her completely off guard. “Me and my roommates would look at the stats every day— ‘look it’s going up, look how many more thousand views;’ it was just crazy,” she remembers.

Since then, Tia has made many more videos about her life at UC Davis, including reviews of the dining commons, campus housing, and tips and advice for freshmen. This past summer, she returned to creating content on other themes, including her travels in Asia, workout routines and getting her first tattoo—and she hopes soon to try her hand at a cooking video.

The questions from viewers continue to flow in, and Tia enjoys giving her take on life at UC Davis to people from all over the world. Increasingly these interactions are crossing over into the offline world, for example when she is out tabling with the Internship and Career Center (ICC).

A Job Helping Others Find Jobs

Though she didn’t know much about the ICC when she came across the role of student outreach and marketing assistant on Aggie Job Link (now replaced by Handshake), she loved its value and mission of helping students to develop job-seeking skills and find professional opportunities. Tia is using her know-how to help the ICC produce video content for YouTube and other social media and doing extensive tabling and outreach at campus fairs and events, where she sometimes gets to connect in person with people who know her from her YouTube channel.

Part of what drew Tia to UC Davis was the friendliness she picked up on from her first tour of campus. Still, many of the questions she gets from viewers on YouTube express worries about finding friends on campus and getting involved with the right groups and activities. “I very much remember being that nervous freshman, and being nervous about making new friends,” she says (she expands on this theme in a YouTube Q&A).

Her own group of friends includes people she met in lecture halls, study groups and the residence halls. Moving off campus as a second year, Tia emphasizes the importance of putting effort into maintaining friendships. “I think that’s what people often don’t realize,” she says. “You have to put yourself out there and then also maintain it. It’s important to check in on other people, make time for other people, and then those natural connections and good friendships will come from there.”

Nathaniel Curiel, Student Affairs Marketing and Communications, can be reached at 530-752-9162 or nscuriel@ucdavis.edu.